The Dress of All Dresses

The dress was one of several outfits in Danish Princess Sofia Magdalena’s wardrobe. She had been betrothed to Sweden’s Crown Prince Gustav since 1751, when she was five years old. The intention was that the union of the two royals would promote peace between Denmark and Sweden. Before the wedding in 1766, the tailor Ströver produced, among other things, her wedding dress, a court gown made of silver fabric.

The ceremony took place, as was the custom, on two occasions, once in the bride’s home country with a representative of the groom present, and once officially with the actual groom in his home country. When the marriage in Denmark had been completed, a description of the ceremony appeared in Stockholms Post Tidningar on 20 October 1766:

Her Royal Highness was dressed in a rather precious dress, made of silver fabric, and on her head she wore a gold crown richly adorned with jewels. Her train was carried by Lady-in-Waiting Miss von Trolle and Miss v. Rabe.

On 6 November, after the wedding ceremony in Stockholm, Inrikes Tidningar announced:

Their Royal Highnesses, the Crown Prince, who was wearing glacé d'argent richly embroidered with gold, and the Crown Princess, wearing a crown richly adorned with jewels and a dress in a silver fabric with silver ornamentation, whose train was carried by three ladies-in-waiting.

After the wedding ceremony in Stockholm, the dress was transferred to the Royal Dressing Room. The exact year is not known, but it first appeared in the inventory lists in 1773. It may possibly have been included in her personal wardrobe as Crown Princess, before being transferred into “state ownership” when she became Queen. As early as 1774, the same inventory notes that a large number of bands, ornaments, name ciphers and the like had been extracted from the dressing room to be “burned out”, i.e. melted down to pure silver.

Close-up of the dress

After more than 250 years, the dress is still shimmering and spectacular. It is also worth a closer look. Click on the dots to find out more. 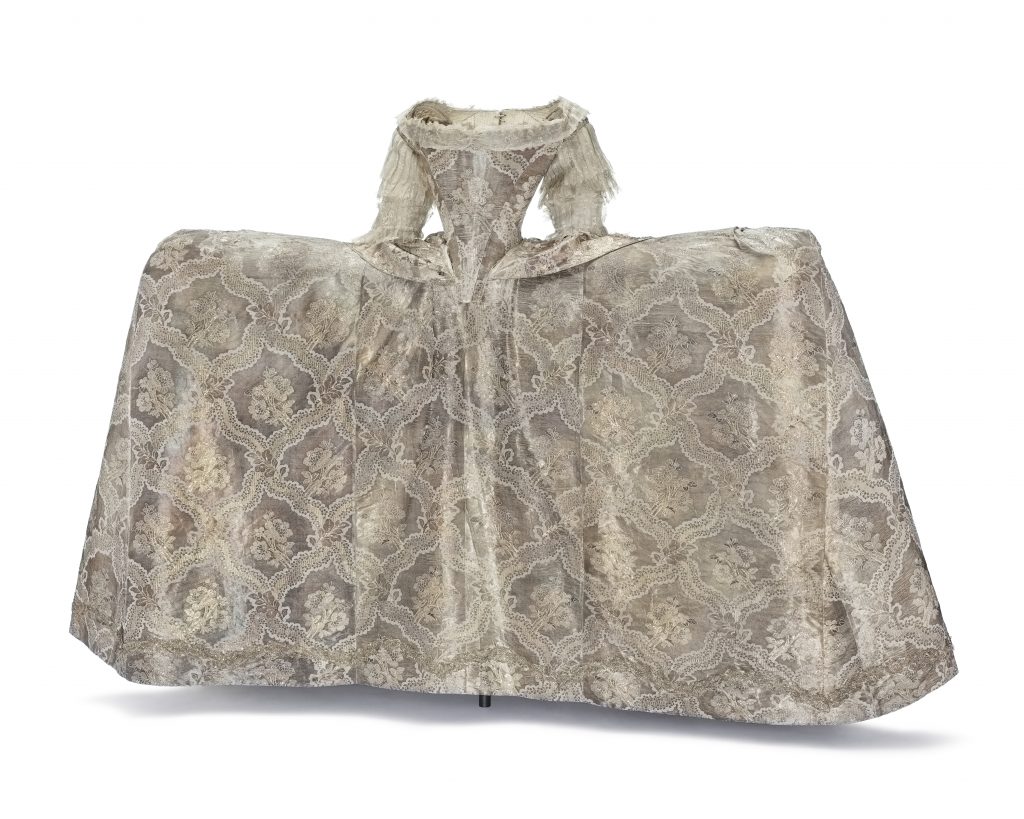 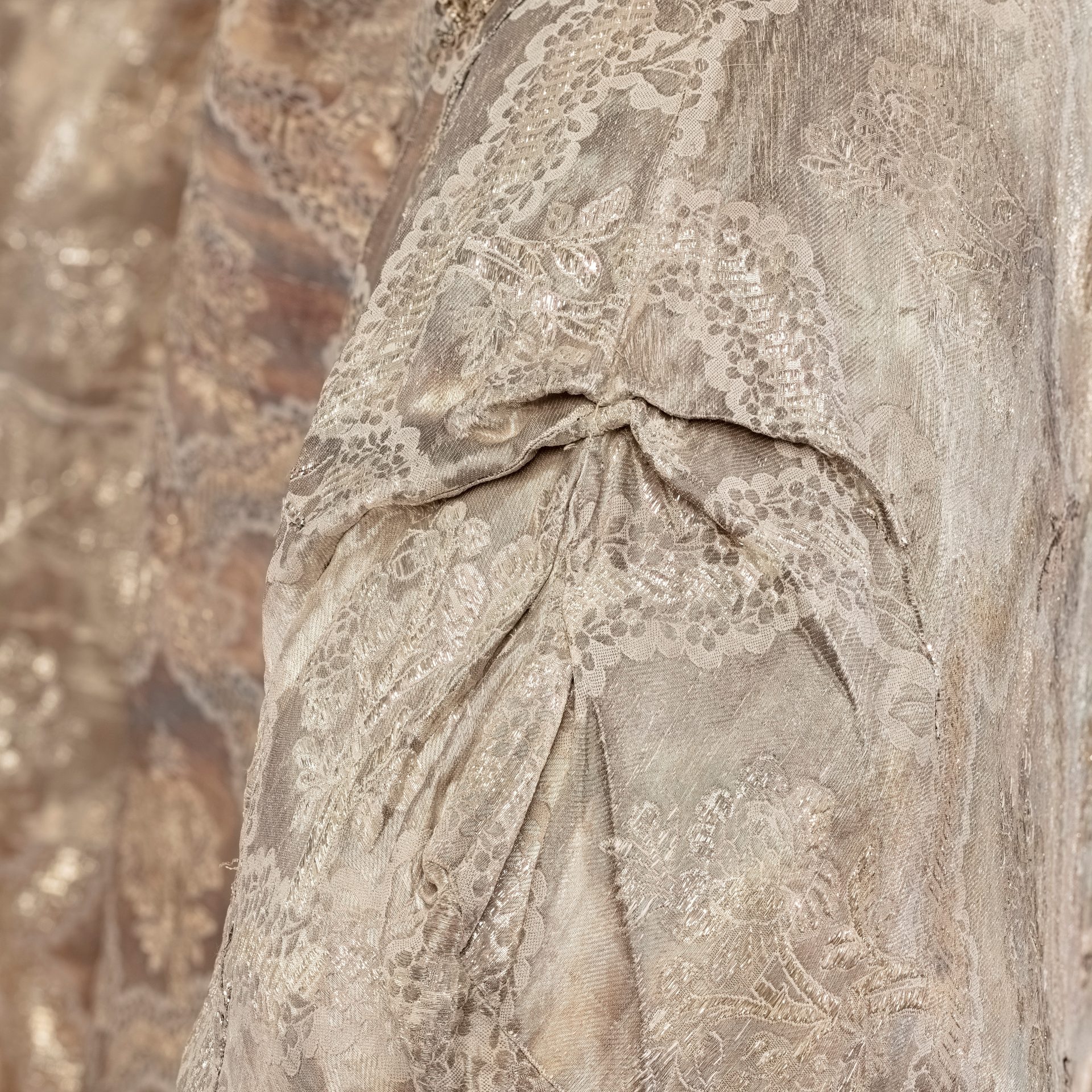 The sides of the skirt were created using pleats to achieve the intended curvature. In the same simple, time-saving way, the skirt’s waistband was created by cutting a slit in the fabric, folding down the fabric to produce a round edge and then sewing a strap over the folded fabric. 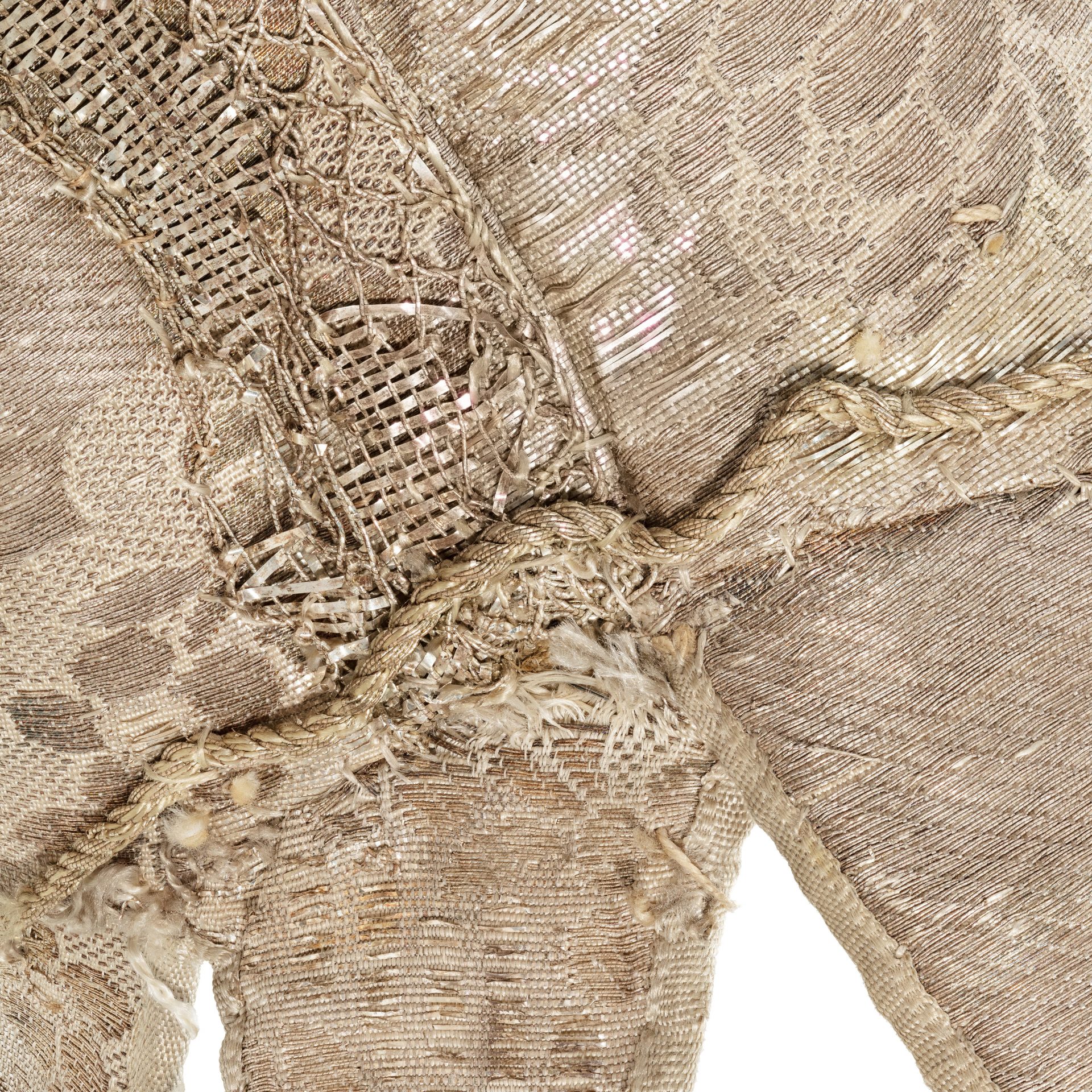 Along the bottom of the bodice is a twisted cord of silver and silk strands, sewn into position about one and a half inches apart. The idea was that the train would hang from this cord. The train’s waistband has remnants of thread showing that four, possibly larger hooks were once in different position than today’s eleven hooks. It is not possible to determine how many hooks there were originally. 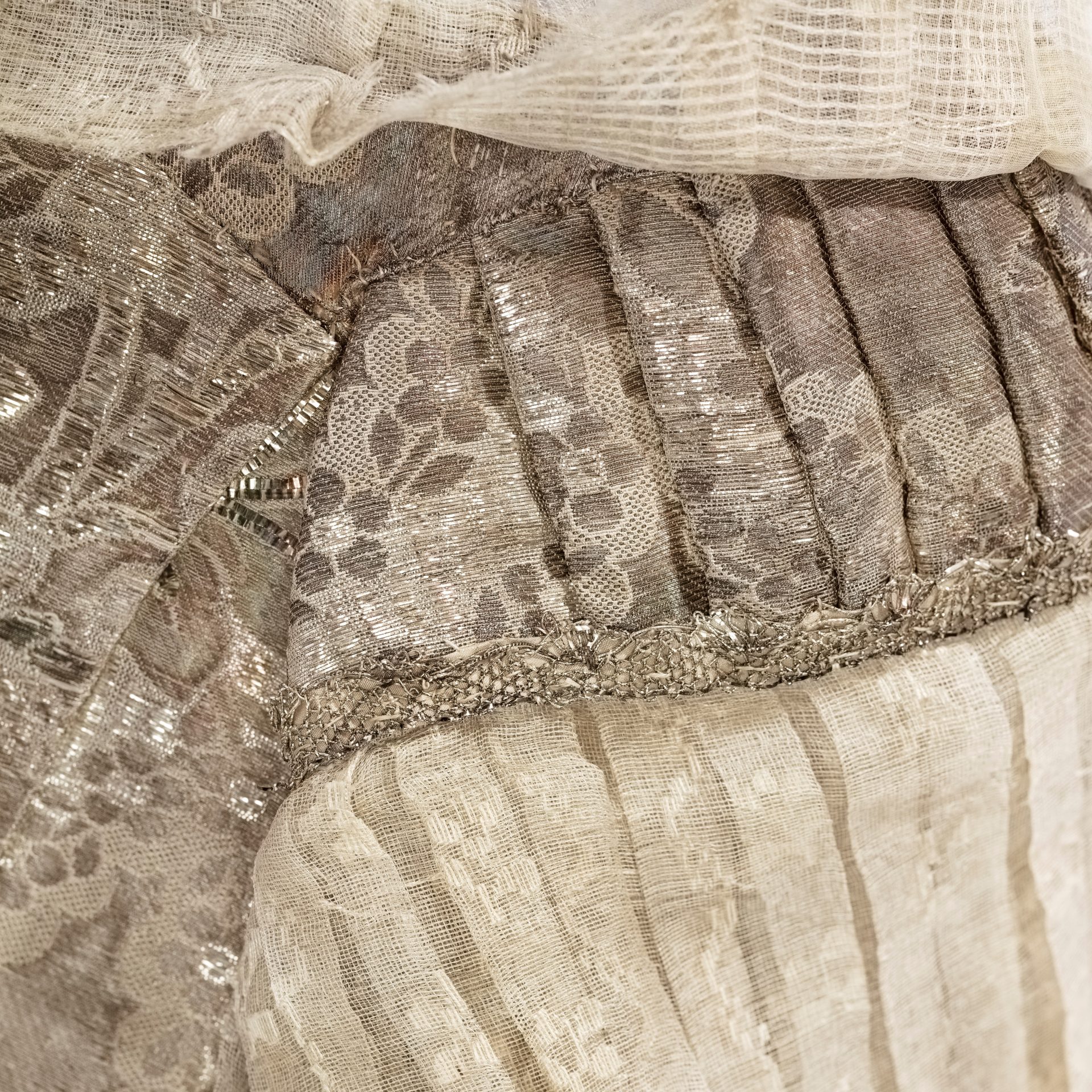 The sleeves consist of two parts, a shorter top section in dual silver fabric with pleats reinforced by whalebone, and a longer section of patterned gauze arranged in inverted pleats. A sleeve of pleated gauze was known as “engagentes” and was customary in a royal gala dress, also known as a “robe de cour”. 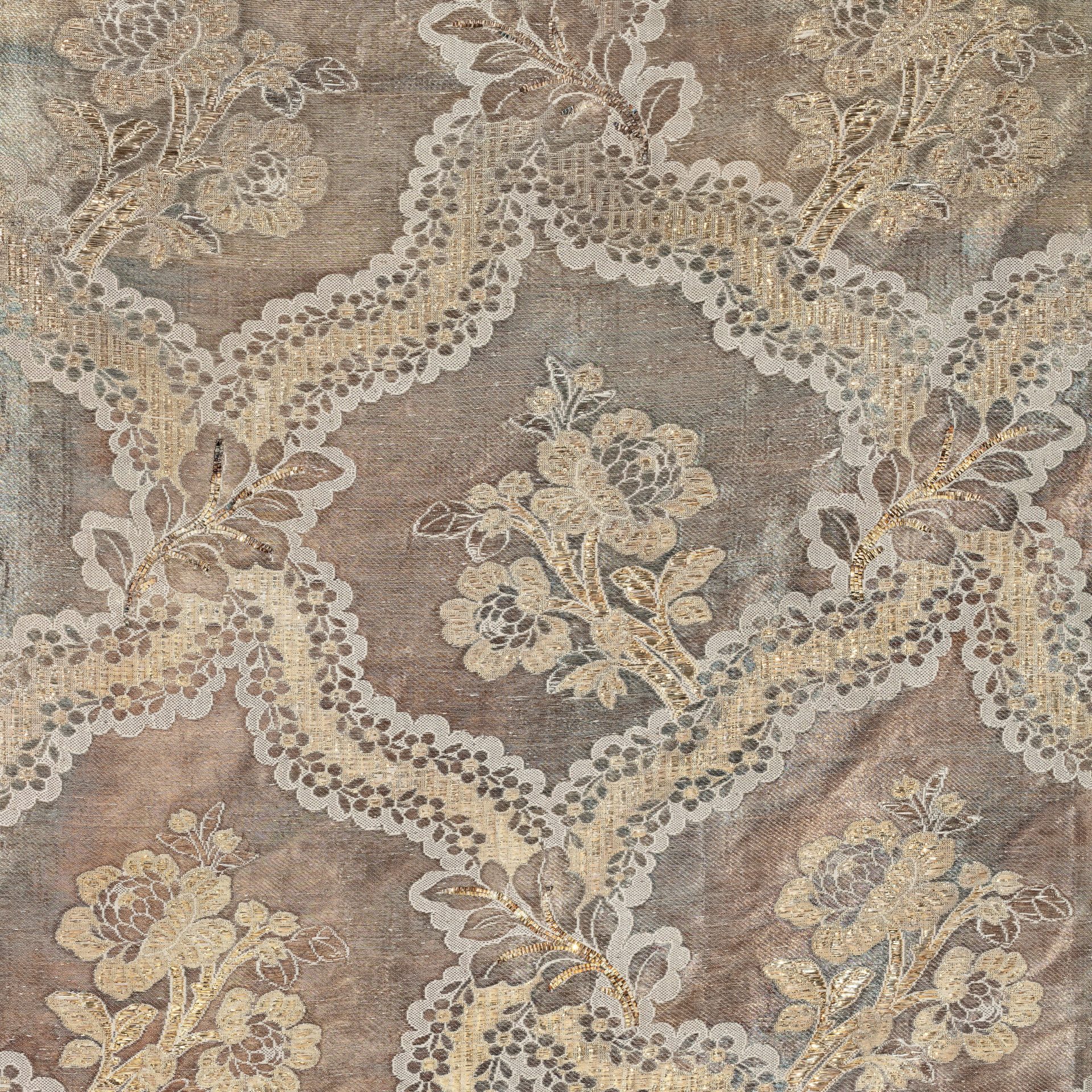 The fabric was probably produced in France. Tailor Ströwer’s bill does not actually specify where the fabric was purchased, but the fabric is precisely 20 French inches wide (54 cm). The larger parts of the skirt and train are a full width, with the edges fully visible on the inside.

The fabric has silver embroidery with patterns in silver and white depicting small garlands, flowers and leaves inscribed in diagonally set squares formed by lace patterned bands. The pattern is most likely to have been intended to be modern, even if the shape of the dress is old-fashioned. 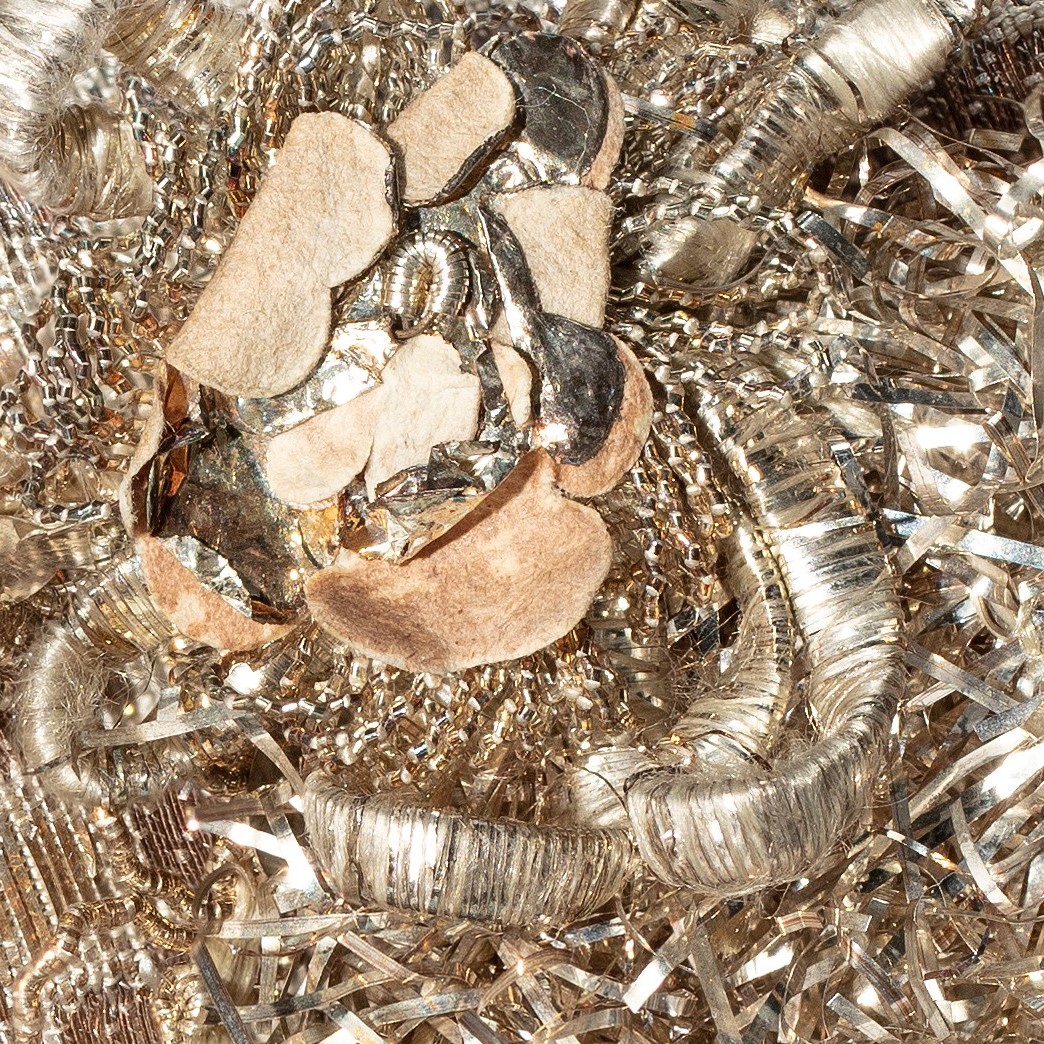 The first text in the inventory mentions that the dress was adorned with silver lace “around the neck in one row, and at the front along the entire length on both sides in two rows, and across the full width below, in two rows” and on the train “with vines and roses, as well as hanging tassels of silver”. A large tassel hung on a silver cord on each side of the chest. The skirt was also “garnished around the full width below with silver laces set deep and narrower outside in waves, filled throughout with vines and pieces of silver, flat lamella and sequins”. Almost all of the ornamentation was melted down in 1774. 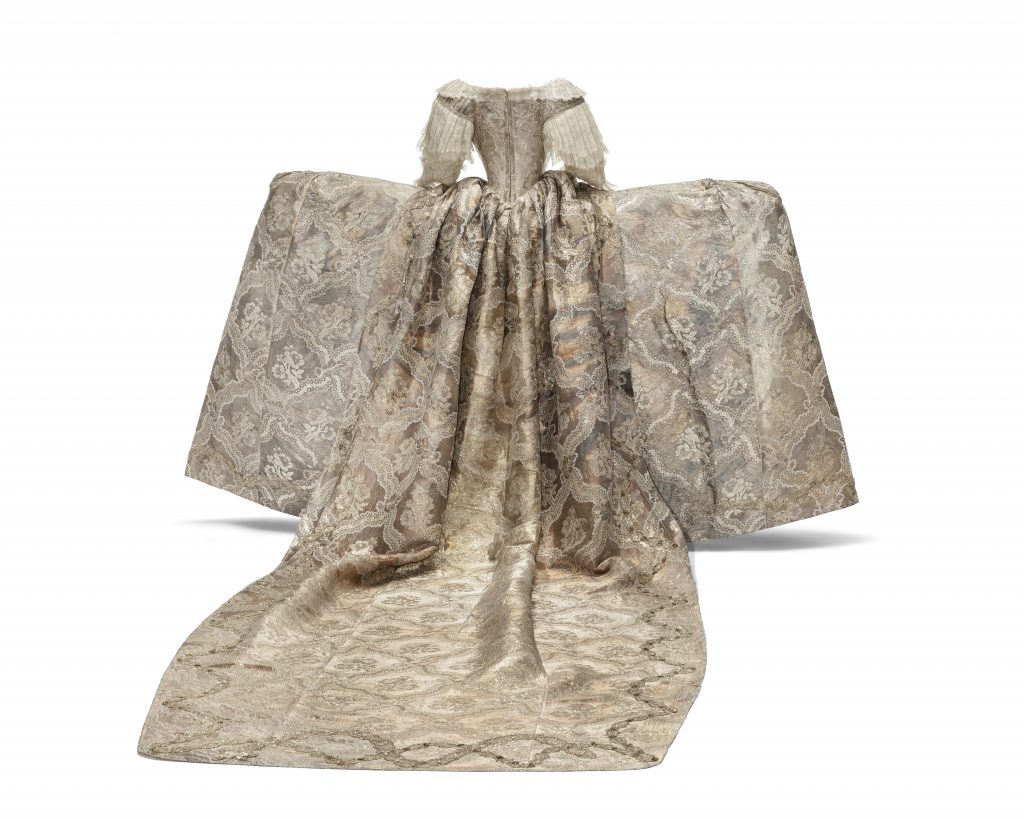 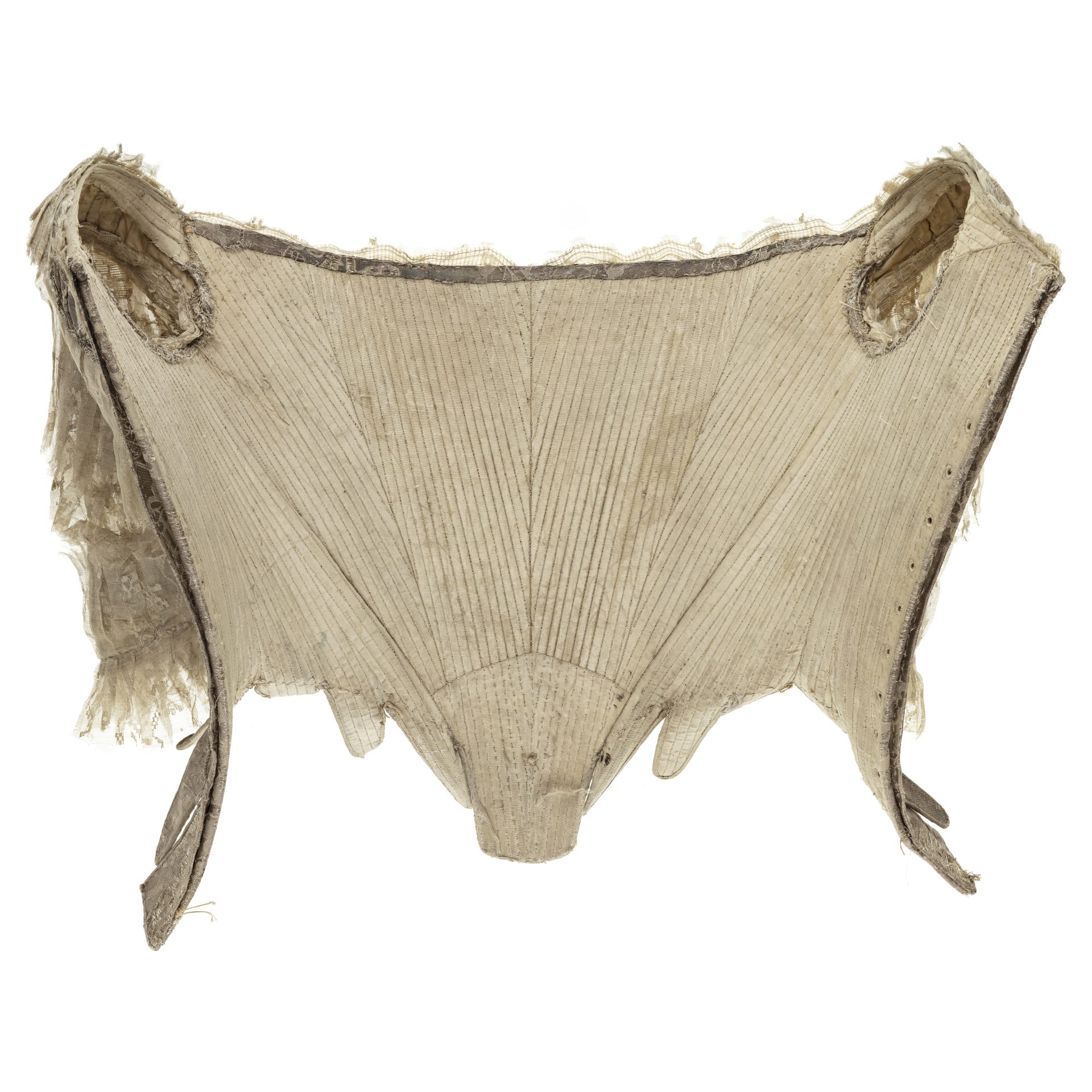 The frame of the bodice consists of a white silk strip and linen. Between these layers there are long, narrow pieces of whalebone sewn into channels. The silver fabric of the dress is then attached to the outside with dot stitches and inserted over the waistband. One piece of the temporary tacking remains from when the dress was being made. The lining is reinforced at the front so protect the skirt and make it more comfortable for the wearer. 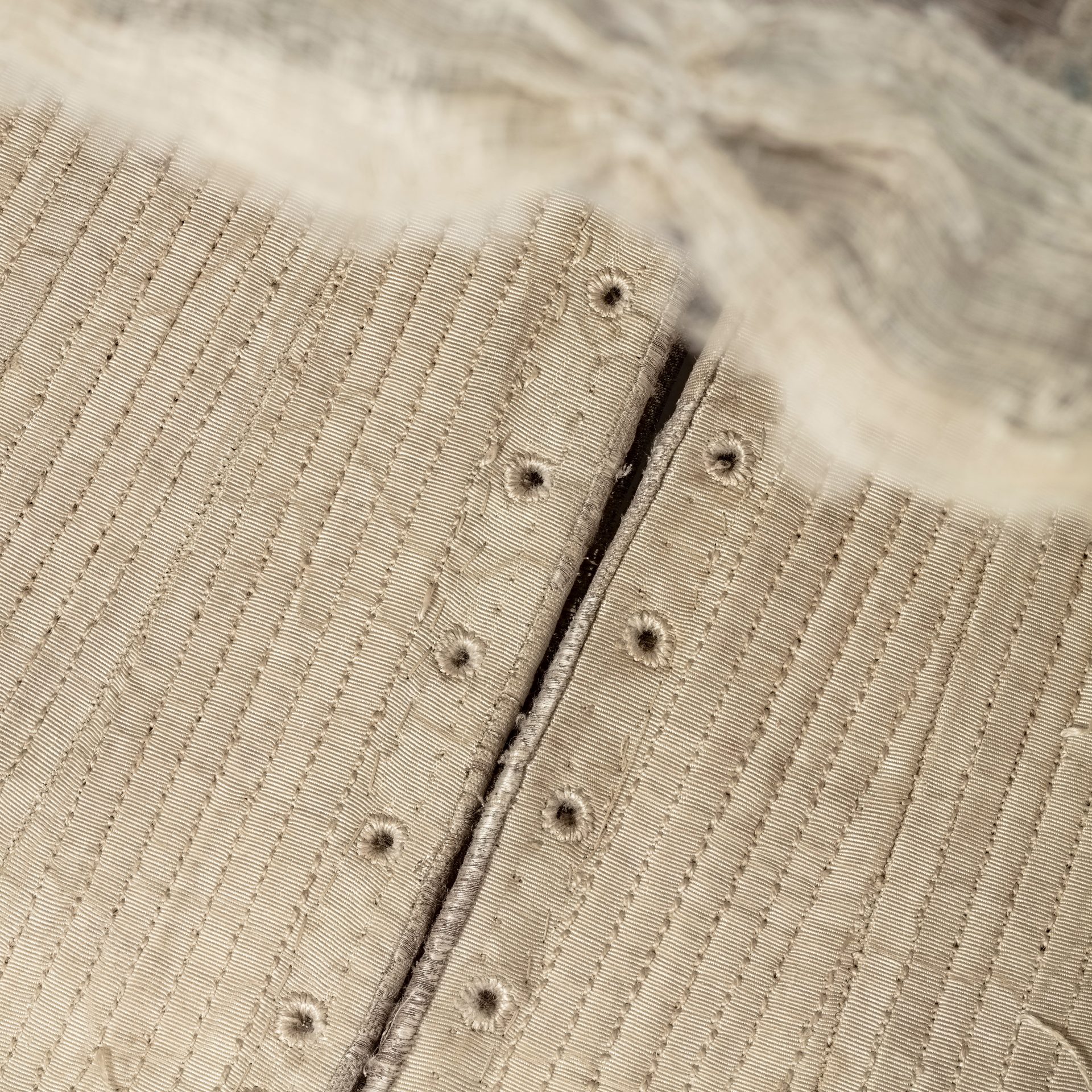 There are eyelets at the back to lace up the bodice. The eyelets are located between two sections stiffened by whalebone to help reinforce them against the wear caused by lacing. The buttoning is concealed on the outside of the garment by overlapping fabric. The eyelets follow the accepted norm with parallel eyelets initially, and then alternating eyelets. 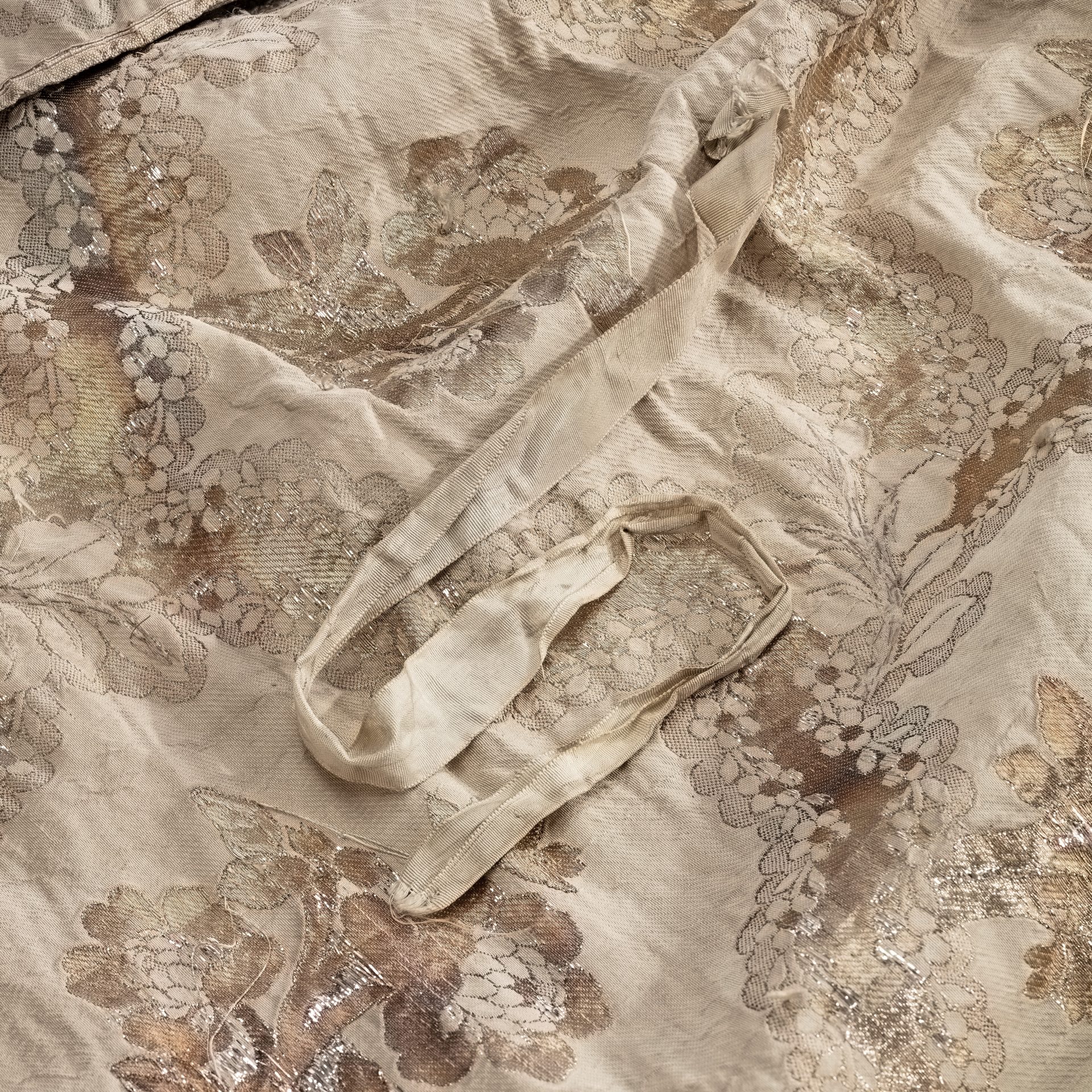 On the inside of the train are drawstrings, 33 cm down from the waist just below the seat, one complete strap and a remnant. The purpose of the straps is clearly to limit the width of the train. One possible use for the drawstrings is to gather the train in a “bun” at the back. There are a number of engravings showing ladies in similar court gowns in which the train has been shaped into a massive bundle at the back, possibly for ease of mobility. 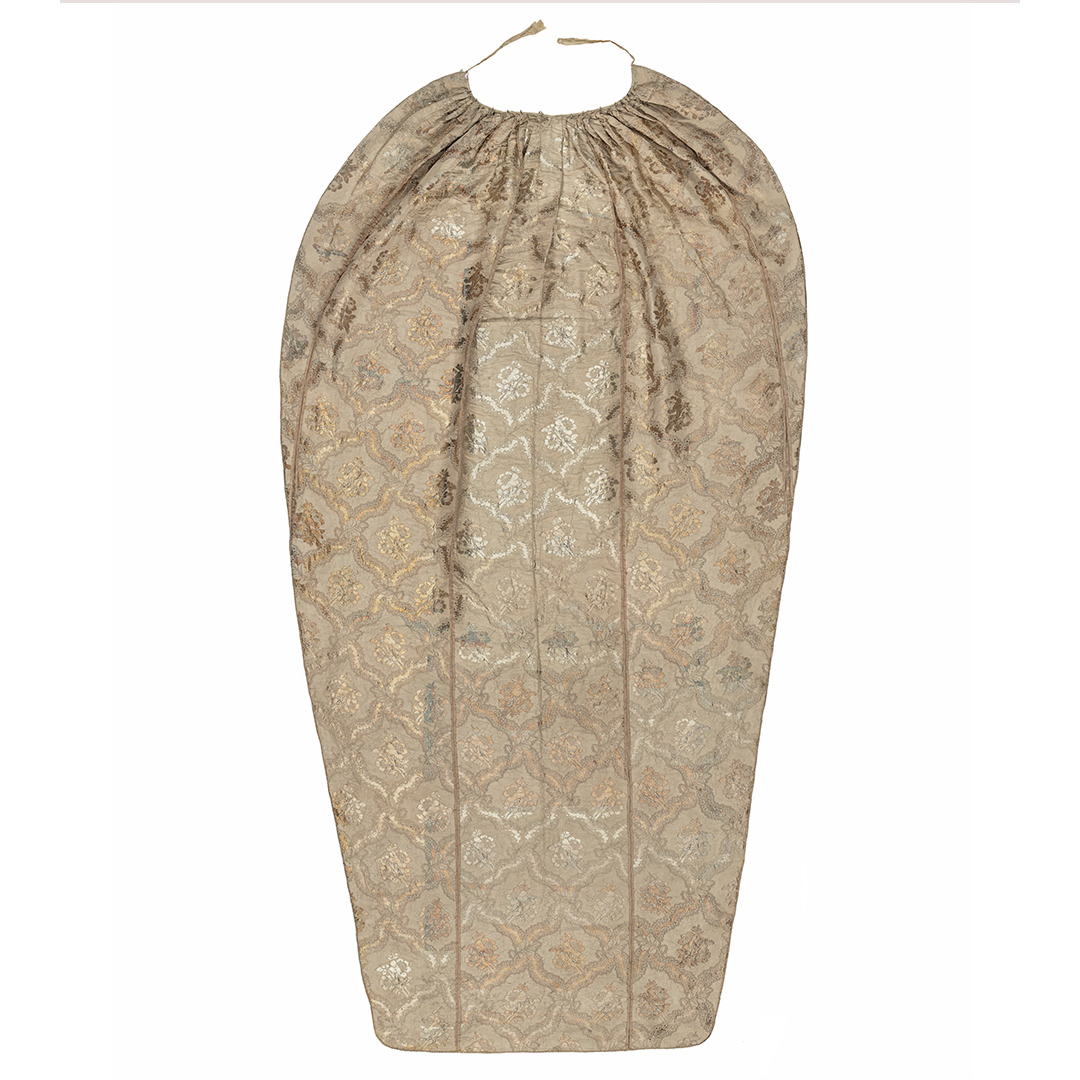 The fact that the train was carried by three people at the wedding ceremony in Stockholm should not be taken as an indication that this was an unusually large train, it was rather a means of denoting rank. This is clear from the fact at the wedding ceremony in Denmark, when she was unmarried, the train was carried by two ladies-in-waiting. Sofia Magdalena’s mother-in-law, Queen Louisa Ulrika, had four ladies-in-waiting to carry her train. 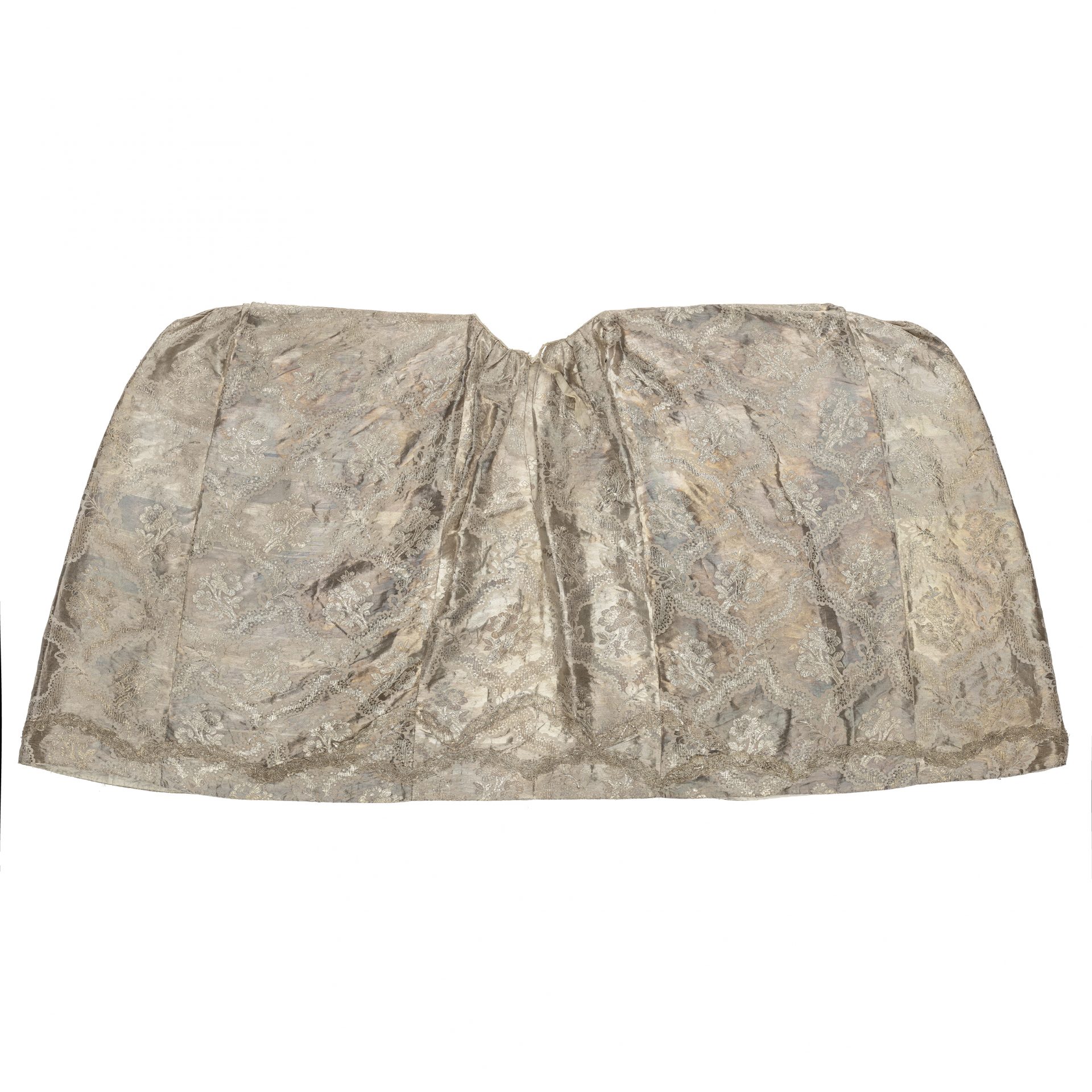 According to the 1773 inventory, the skirt had openings in the sides garnished with lace and with drawstrings made of silk strips. The previous length of the openings is perfectly clear both from the outside and inside of the skirt. The person who sewed the openings together has used very rough whip stitching. The vent at the back is therefore a change made after 1773. The dress has presumably been put on display on several occasions, and therefore been given an opening that is more useful for that purpose. A vent at the back would not have been practical, nor would it have been justified for sewing practice around the mid-18th century.

It's for real. Have a look at our opening hours and plan your visit.

The Imprint of Monarchy